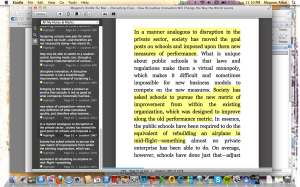 This weeks reading begins with an explanation of disruption theory and how that applies to schools with the implementation of new standards and standard-based testing. In terms of “disruption in the private sector, society has moved the goal posts on schools and imposed upon them new measures for performance.” (p. 51). These new goal posts and new measures of performance require that “schools [to] pursue the new metric of improvement from within the existing organization, which was designed to improve along the old performance metric”—equivalent to “rebuilding an airplane in mid-flight,” which is a feet yet to be accomplished by any private enterprise (p. 51). And while the task seems daunting and requires new primary jobs and new energies focused in new directions, research affirms that schools do evolve and improve as new measures and goals are set.

We as human beings have survived and thrived heavily in part to our ability to adapt, to anticipate and to evolve. This is also the case for our schools as outlined in the chapter. One example of a major shift in our school system dates back to the founding fathers, whom, envisioned schooling as the best way to preserve and instill democratic ideals and morals in hopes of helping all citizens assimilate into the American culture as “functioning, self-governing members of the republic” (p. 52). Then, in hopes of competing with industrial Germany, schools were not only required to instill democratic ideals, but also to prepare every person for jobs and participation in the workforce (p. 53).  Not only was the primary focus of schools redefined, but also, that existing system was reconfigured extending high school to all students.

Reading that with time, and diligent effort, schools characteristically rise to meet new measures and standards was encouraging. As a preservice teacher, we are already bombarded with the present failures of our public school systems. Additionally, the current transition to the Common Core, the standardizing of curriculums and testing, brings with it new pressure to achieve for both teachers and students. We are entering the teaching profession in the midst of these growing pains and must do our best to adjust while remaining critical of both our existing organization as well as the reconstruction.

This week I felt more comfortable using the Kindle eReader to navigate Chapter 2. With that said, I stand by my preference and love for holding a book and physically turning each page. My only negative feedback for this week’s experience has to do with the process of making a note. A couple different times, (yeah, you’d think I’d learn my lesson after the first time) I would go to make a note, but after typing a small paragraph, I would decide the font was too small to proof-read what I had written. So, I moved to the full screen option and all that I had typed was lost. If moving from a smaller screen to full screen or visa versa, be sure to save your note first!